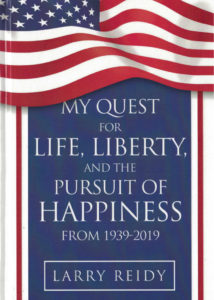 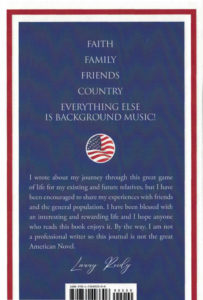 This book is about my journey through this great game of life. I have been fortunate to have a very interesting and rewarding life.

This book was meant to be a journal for existing and future relatives, but a good friend of mine, Ted Snedeker who is an accomplished author, encouraged me to share the condensed version of my life with friends and the general public.

I am not a professional writer, but I think most people will enjoy this book.

I have to warn the prospective reader that I am very conservative and I wrote a few derogatory remarks about the Democrat Party.

What an interesting life

Larry has written a concise life story that reads like a novel. After twelve years of catholic school and a stint as an MP in the Army, Larry came home and married his high school sweetheart. After seven children and fifty-eight years of marriage Nancy is still the love of his life. Larry built a string of businesses in Cincinnati and later in southern Indiana. His trials and tribulations, successes, and even a few setbacks read like an American success story straight out of Horatio Alger. Highly recommended.